Di Voci spent an amazing few days taking part in an International Choirs festival across Krakow, Poland.   Singing in beautiful venues across the city with other international choirs over three days and then taking part in a competition in which we came third.   A fabulous experience for all of us with an invitation to come back next year! 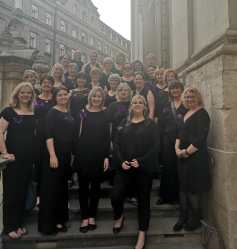 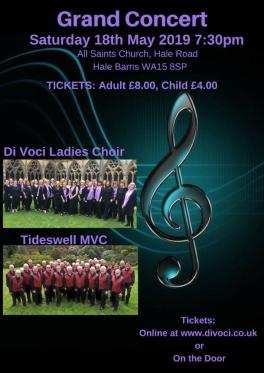 A well attended concert at All Saints Church, Hale Barns with a very varied programme from Tideswell and Di Voci and collaboration on The Seal Lullaby, and Saints go Marching In.   With some lovely feedback from the audience, good acoustics and a great atmosphere for the evening – we thoroughy enjoyed the concert and hope those who attended did too.   We hope to be able to sing with Tideswell again in the future.

Another amazing joint concert with Johns’s boys this time in Altrincham to a packed St. George’s church – a thoroughly enjoyable concert to end the year.   We hope to collaborate with Johns’ Boys again in the future.

An amazing showcase for both choirs with a very varied programme which was enjoyed by a very appreciative audience in the Stiwt Theatre, in Rhos, nr Wrexham.  The highlight of the event was when the two choirs joined forces to sing together Benedictus from Carl Jenkins’ Armed Man, and the Hallelujah Chorus from Handel’s Messiah.  It was a really uplifting evening of music and the two choirs perform again in Altrincham on 9th December at St. George’s Church.    We would like to thank Johns’s Boys for singing with us and we hope to do so again in the future.

In the Year of the Woman our summer concert this year had a theme to celebrate the achievements of the Suffragette Movement.  The programme focused on women poets, lyricists, composers, arrangers and songwriters and included readings providing an insight into the lives  of some of these amazing women.  Lorraine, our MD, put together an amazing programme with a wide range of pieces including Joni Mitchell  “Both Sides Now”,  Eleanor Daley “Lake Isle of Innisfree”, Eirks Esenvalds “Stars”, Jule Style “Don’t Rain on my Parade with the evening opening with the “March of the Women” written by the two suffragettes Ethel Smyth and Cicely Hamilton.    A truly inspiring evening with great feedback from an appreciative audience.

Di Voci were thrilled to be able to sing in such a prestigious venue where the acoustics were utterly amazing.   A difficult and varied programme which leant itself to the majesty of the surroundings.  We were delighted by the appreciative and complimentary comments of the audience and visitors to the cathedral.   An emotional and memorable performance for us all.  A compilation video can be found on our “Listen to Di Voci” page

Di Voci were delighted to guest at Altrincham Concert Orchestra’s Christmas concert in the United Reformed Church in Hale.  It was a very varied programme with some collaborative pieces between Di Voci and ACO.  A truly enjoyable concert with great feedback from the audience.  We look forward to performing with them again next year.

Di Voci  invited to perform with a large line up of other musicians at the Summer and Christmas festivals held in Hale Barns including chart topper Jona Lewie as the headline star at the Christmas concert.  It was good to be a part of such a varied range of musicians.

Well, what can we say – 10 years of Di Voci, and we celebrated in style.   A wonderful venue at the Bowdon Rooms, with food, singing and dancing the night away.   Special guests were Dominic Halpin and the Honey Bees who brought the house down – the perfect band for what was a memorable occasion.  We would also like to thank the tango dancers who took centre stage during our rendition of Libertango – a breath taking performance by them.  Thank you to everyone who has supported us over the years and we hope you enjoyed the evening as much as the choir.  Here’s to the next 10 years! 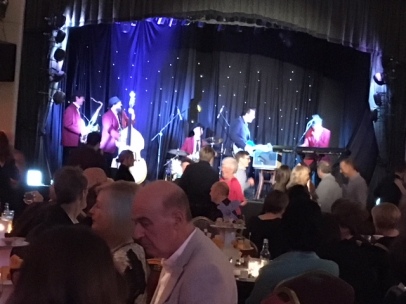 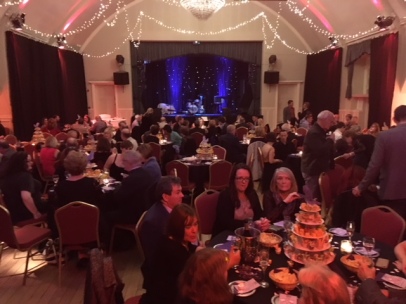 We had a wonderful line up for our summer concert with guests Chester Male Voice Choir and Baritone soloist Patrick Owston.  On a particularly sunny June afternoon we were treated to a great programme by Chester MVC which included a varied programme from “An American Trilogy” to Verdi’s “Speed your Journey”.   It was a particular delight to listen to the young baritone soloist Patrick Owston – a star of the future.   There are extracts of the concert on our “listen to Di Voci” page. 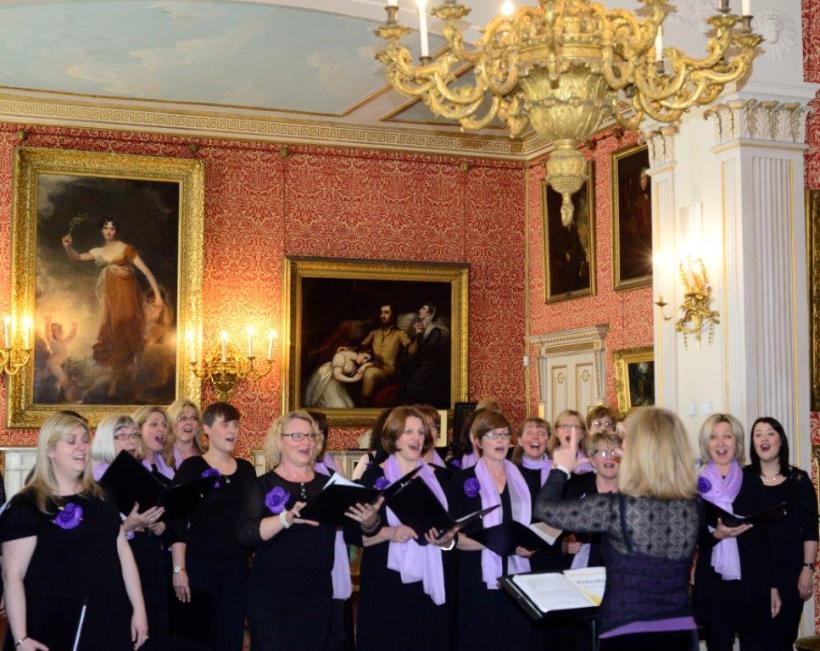 Saturday 20th May, Di Voci sang as guests of The Vivaldi Ensemble (a 15 piece chamber ensemble) in aid of the AudMEd charity at the impressive Tabley House, near Knutsford.   We were very pleased to join Vivaldi Ensemble in what was a varied programme in a really beautiful setting of the “Gallery Room” at this stately home.  With new born lambs frolicking in the surrounding fields at the end of the lawn our rendition of “Listen to the Lambs” felt like it had more meaning, (with an extra background “bleat” here and there!!).  Lovely to sing in such beautiful surroundings and even better to be able to raise money for a worthy charity – https://www.audmed.org.uk/. 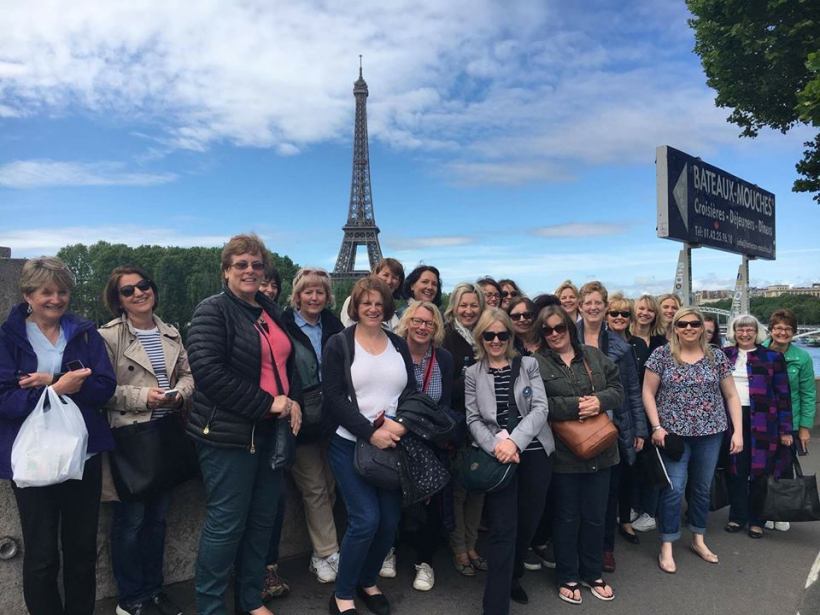 Di Voci performed a solo concert at the Eglise St Louis En L’lle in the centre of Paris to a very warm and appreciative audience.   The choir performed a mainly acapella programme together with duets and smaller ensembles from choir members.    The acoustics in the church were unbelievable with the ends of phrases taking seconds to release producing a fantastic sound.   We were all very moved by the reaction of the audience who were very enthusiastic in their applause and comments.  A great experience for everyone.

We were finalists in the Great British Prom competition.   The Great British Prom event was held at 4 separate venues across the country and 4 choirs have been selected as finalists for each venue.   Di Voci were finalists at the Bolesworth Hall venue.  The judging in part is based on votes or “likes” received for each choir’s entry on the Sound Cloud site.   Each choir  put forward a recording for the initial selection process.    The final judgement was made by the conductor.

We are proud to announce that the respected and well known musician Sasha Johnson Manning became our Patron in 2016.  Sasha is a composer and performer including singing for BBC Radio 4 daily service.  She has been commissioned to compose both secular and religious works.  With Poet Laureate, Carol Ann Duffy, she wrote the Manchester Carols.  We are very proud to have her as our Patron.

We are happy to announce that our new CD “Singing Bird” is available – price £10.00 please contact Cath at cath.lee@ntlworld.com .  CDs are also available to purchase at our concerts.

Di Voci join Sale Brass at their concert celebrating Her Majesty the Queen’s 90th Birthday this summer. The concert will be a celebration of British music and takes place at Sale’s Waterside Arts Centre on Saturday 11th June 2016.

Di Voci were invited to sing at an International Choir Festival in Limerick joining with choirs from the USA, Sweden and Ireland performing at Limerick Castle, and Limerick Cathedral. 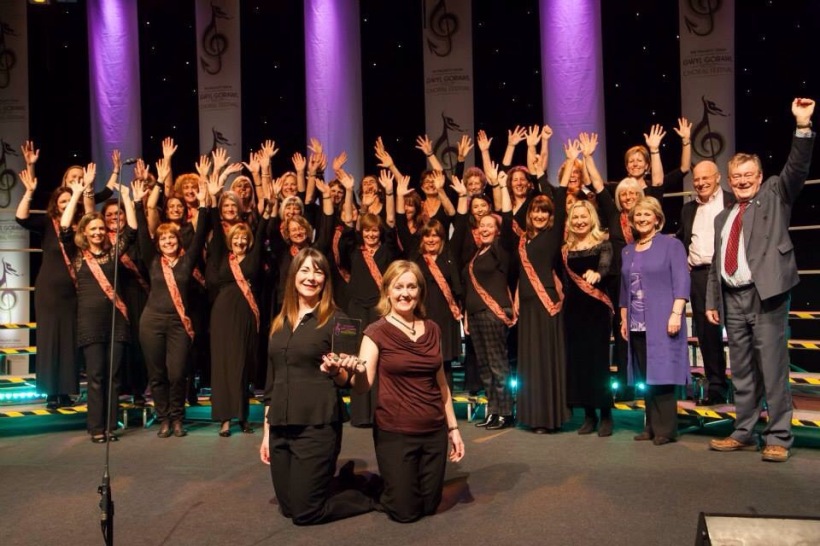 Di Voci Ladies Choir reached new heights this November taking the title of winners of the Ladies choirs section of the North Wales Choral Festival in Llandudno.  Di Voci competed against ten other choirs from across Wales, England, Scotland and Ireland in a wonderful afternoon of music. The winning ten minute programme consisted of Gershwin’s ‘I Got Rhythm’, Britten’s ‘There is No Rose’ from the Ceremony of Carols and finally an a cappella arrangement of ‘The Battle of Jericho’.

The 35 strong choir, under the leadership of musical director Lorraine Brown, were delighted to take top spot in the Ladies Choir section of the event, which was held at Venue Cymru in Llandudno.  Judges rewarded Di Voci for performing an interesting and varied selection of numbers.

May 2013 Sale and Altrincham Messenger

The annual event, which features music and speech competitions, was won by the ladies at their first time of entry.

For the full article, click on the link below:

“Their singing was a revelation – clear, wide range, superb intonation, and dynamic range, and what power from only 27 singers! Their items were wide ranging and a joy to listen to, and the combined items with TMVC were something really special.”

THREE Altrincham choirs are tuning up to bring the sound of Christmas to Manchester Cathedral for a charity carol concert.

Hot Cinnamon, Di Voci and the choir from St Vincent’s Junior School, in Osborne Road, will be taking to the stage on Tuesday, December 8th to raise money for MedEquip4Kids.

MedEquip4Kids funds medical equipment and improves facilities at children’s wards and neo-natal units at hospitals across the North West. The charity is funding Clown Doctors to visit the wards of North Manchester General Hospital and the Royal Manchester Children’s Hospital spending time every week with the young in-patients and keeping them amused with music, jokes, magic and laughter to help them forget they are in hospital. 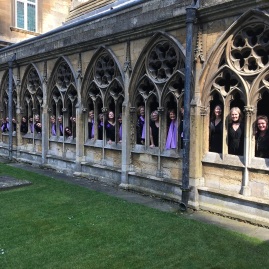 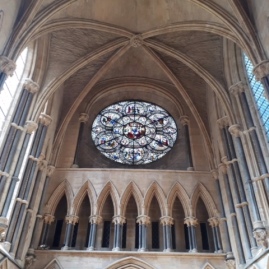 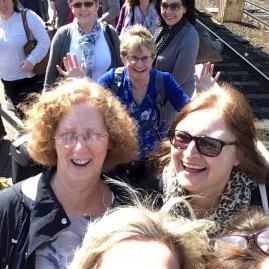 On route to Lincoln 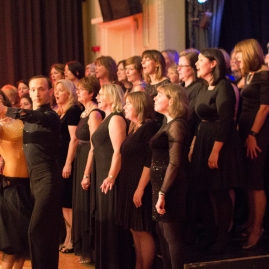 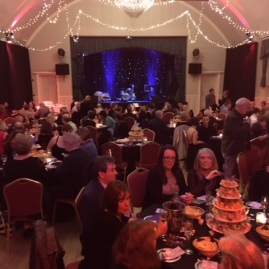 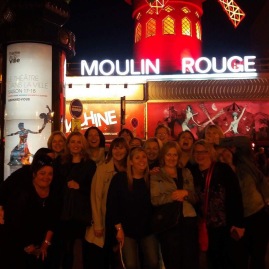 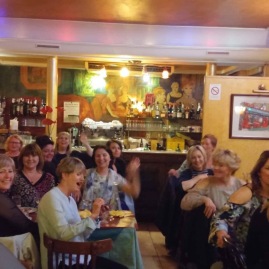 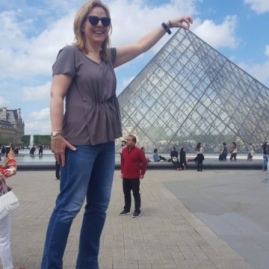 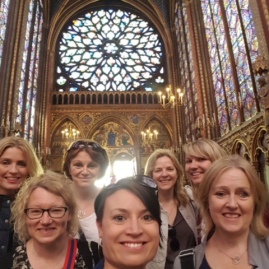 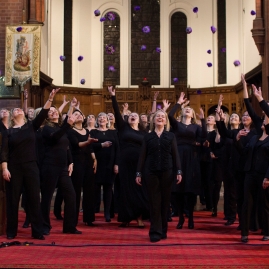 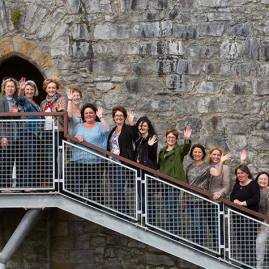 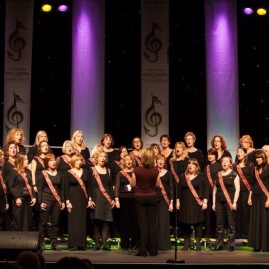 In performance at the North Wales Choral Festival 2014

In performance at the North Wales Choral Festival 2014 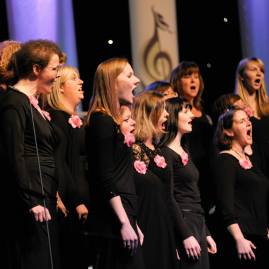 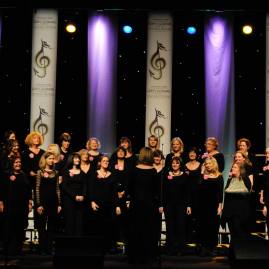 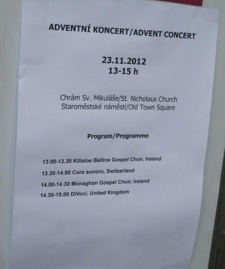 Charity concert for the Phillippines 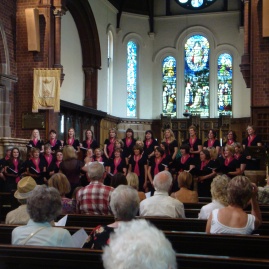 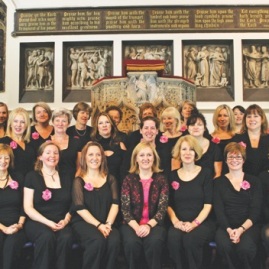 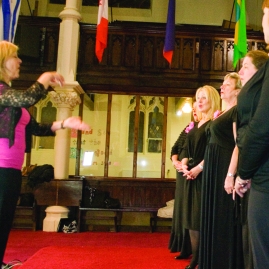 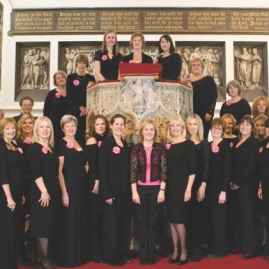